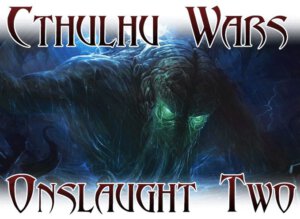 The latest wave of mythos madness, from Sandy Petersen, has arrived on Kickstarter and already hit 555% funding in the first day. Cthulhu Wars – Onslaught Two launched earlier today and there are quite a few options for those who already own Cthulhu Wars and those who don’t. The initial pledge level is a bit pricier than most gaming Kickstarters ($150) but you’ll see you’re getting plenty for those ducats.

The Great Old Ones have returned to claim the ruins of Earth, and you are one of them! Cthulhu Wars is a competitive strategy game in which 2 to 8 players face-off to determine the fate of the planet. You’ll recruit cultists and summon monsters, cast spells, open interdimensional gates, and awaken your Great Old One!

Every game is different – as you play, you unlock new spellbooks, giving you new amazing powers unique to your faction. Play is highly asymmetric – every faction has a unique set of spellbooks and creatures. A strategy that works for Opener of the Way will not work for Windwalker.

Cthulhu Wars’ original Kickstarter campaign launched in 2013 to stellar success. Now it returns, with seven new expansions, plus fourteen of our original expansions. If you’re already a fan, now is the time to complete your collection! If you have been waiting for the opportunity to get in on Cthulhu Wars, this is your best opportunity!