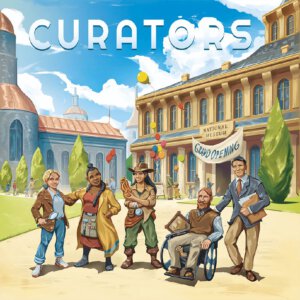 This Spring will see the release of a museum building Eurogame – designed by Tove Jomer, Pablo Jomer, and Jacob Westerlund – from Worldshapers. In Curators, players will compete to create the most impressive museum in order to win the ‘Museum of the Year Award’. The game is for one to four players, ages 14+, plays in around 45 to 60 minutes, and will carry an MSRP of $50.00 when it arrives in Q2 2021.

Curators is a Euro-style, tile-laying game for 1-4 players in which players build museums and their collections to attract visitors.

Your job as curator is to expand the museum and its collection. With help from your employees you will build new wings and collect objects to put on display in the museum.

The employees are represented by five chips that are used to determine what different actions you may take in the game. Select your action from the face up chips, flip the chip over to show you have used it. This will reveal a different action on the other side which you can use at a later time.

On the other hand, if you ever have two of the same action available on your turn you may choose to double up. This means that on a single turn you can flip two chips and do double the amount of work.

During play you acquire loan contracts for famous objects, like ‘the dice tower of a Roman soldier’ or ‘the skull of the neanderthal man’, from other museums. To score the points for these objects you need to complete a tetris like puzzle of color and space matching.

When the game ends only one museum will stand as the victor and take home the ‘Museum of the Year Award’.