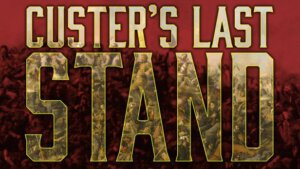 Worthington Publishing has released Custer’s Last Stand – The Battles of Rosebud Creek and Little Big Horn. The two player game promises a low complexity introduction in one to hours of gameplay. The little remembered battle of Rosebud Creek is included as well effectively giving you two games in one box. Custer’s Last Stand is available now and carries an MSRP of $75.00.

This is an old school hex and counter war game that includes 2 full complete games in one box. Both game maps are hard mounted, front and back on one large game board. Both are playable in under two hours. Both are for 2 players but are solitaire friendly. Both are complete games unto themselves yet use the same basic rule system. Everyone knows about the Little Big Horn battle. The battle of Rosebud Creek was its prelude, just as big, and may have prevented troopers from reaching Custer.

Major General George Armstrong Custer. 23 year old General, Bold Cavalry Commander, and Hero of the Civil War. Wild, Unpredictable, Ambitious. Fast forward 11 years: Suspended, Reduced in rank, returning to command the 7th Cavalry in one more battle, potential presidential candidate. Looking for a fight and a return to glory.
Sitting Bull, Crazy Horse, Gaul and the Sioux nation will give him his fight, and in some ways his glory…

Now be Crook at the Rosebud or Custer at the Little Big Horn OR Crazy Horse and Sitting Bull. 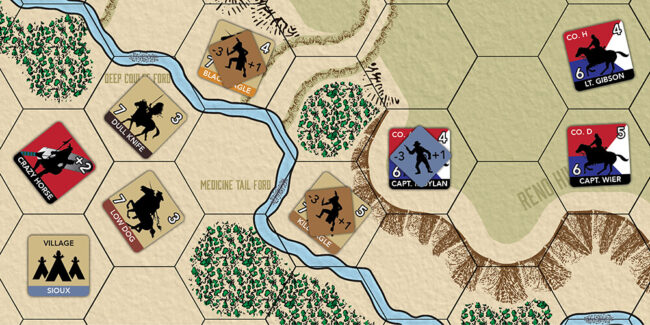