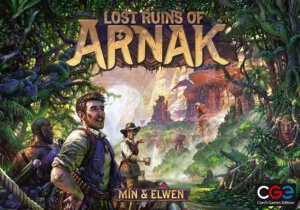 Czech Games Edition will release Lost Ruins of Arnak later this year. In the game players will compete to explore a mysterious island in a mash up of deck building and worker placement. Lost Ruins of Arnak is for one to four players, ages 12+, plays in around 90 to 120 minutes, and will carry an MSRP of $59.95 when it arrives in Q4.

On an uninhabited island in uncharted seas, explorers have found traces of a great civilization. Now you will lead an expedition to explore the island, find lost artifacts, and face fearsome guardians, all in a quest to learn the island’s secrets.

Lost Ruins of Arnak combines deck building and worker placement in a game of exploration, resource management, and discovery:

Discover the Lost Ruins of Arnak!