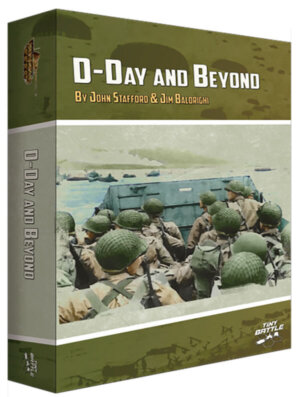 Tiny Battle Publishing is releasing their largest game yet in the new WWII title, D-Day and Beyond. This operational level game, designed by John Stafford and James Baldrighi, tackles the Normandy landings and the Allied breakout from the beachheads. D-Day and Beyond is for two players, ages 14+, and can be ordered from Tiny Battle for $49.00. The normal MSRP will be $55.00.

D-Day, the largest amphibious invasion in history, opened the final chapter of the war in Europe with the landings on four Normandy beaches. For almost a year, General Eisenhower balanced Allied resources and clashing subordinates as he slowly drove back Field Marshal Karl von Rundstedt’s forces, who struggled with Hitler to command his theater forces. In late January 1945 the Rhine was breached and the end of the Third Reich drew nearer.

D-Day and Beyond is a tense, two-player operational board game covering the European theater from the French Atlantic and Mediterranean coasts to the dense German forests, the Siegfried line, and the Rhine River. The Allied player faces the tough decision about where and when to land troops, what scarce air and naval resources to employ on offense or defense, and struggles to keep a coherent supply line to his forward troops. The German player has to throw the landing(s) off the beach, if able, and failing that, fight a retrograde war that requires balancing holding key terrain, slowing the Allied advance, and preserving units. Additional rules showcase the Resistance, rail movement, airborne operations, carpet bombing, the release of German reserves, and the infamous Wacht Am Rhein offensive known as Autumn Mist.