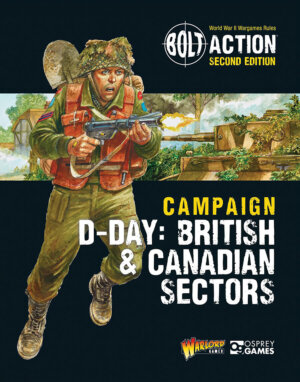 Next month will see a new Bolt Action miniatures WWII theater book from Warlord Games. D-Day: British & Canadian Sectors will feature those nations during the Normandy invasion. The 108 page hardcover will carry an MSRP of $30.00 when it hits stores April 20th.

This campaign book focuses on some of the key clashes fought in Normandy in the summer of 1944 as British, Canadian, Polish, and other Allied forces engaged in desperate battles against a dedicated and determined German opposition. As well as summarising the history, this book also details a number of scenarios inspired by the engagements within the Normandy campaign, and the special rules required to play them.

This book tells the story of the British and Canadian contribution to this monumental task, and the stoic German resistance they faced. It guides Bolt Action players from the latter stages of D-Day, beginning with the fierce fighting in the coastal towns off the beaches at Gold, Juno and Sword, through the violent clashes around the strategically vital city of Caen, and to the march against Germany itself.

Inside, you’ll find thirteen diverse scenarios, covering the action from the first pushes inland, to the dramatic climax of the campaign in the British & Canadian sectors during Operation Tractable.  We’ve also included army lists for four of the campaign’s most important forces – the Canadian Army, the battle-hardened Commandos, the fanatical 12th SS Panzer Division ‘Hitlerjugend’, and the Luftwaffe Field Division. These new army lists add a whole new dimension of play, allowing you to create themed forces for your campaigns in Normandy!

We’ve also included a whole stable of new special characters, including the VC-winning medic Corporal Frederick Topham, who put life and limb on the line to rescue wounded men, and the fanatical Kurt ‘Panzer’ Meyer, who earned his Iron Cross leading the Liebstandarte division’s reconnaissance battalion in Russia. These special characters are the perfect opportunity to theme your force further and make for amazing conversion opportunities.

Pre-Orders Have Begun for Second Wave of Judge Dredd Miniatures