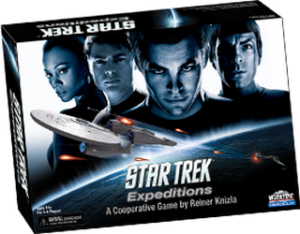 It’s a co-op game for 1 to 4 players, yes you have to cooperate wth yourself in the solitaire version.  Featuring 6 WizKids detailed miniatures of the reboot versions that look excellent.  (Reboot versions?  Who’s idea was that?).  The game will feature a mission for the players to defeat, with a branching systems to give a high replayability factor.  The question is, Is it possible for Kniza to develop a Star Trek game, the most thematically developed franchise in the universe, with no theme?  Let’s hope he got it right.

You take on the roles of Kirk, Spock, McCoy and Uhura responding to an invitation from the Nibian government to open discussions about the planet joining the United Federation of Planets. However, now that the Enterprise has arrived, you find the President of Nibia less happy to see you than the invitation suggested, and Mr. Spock has detected evidence that another starship may have recently been in orbit.

Lead your away teams made up of crew and resources from the Enterprise to solve the major story arcs plus key side missions before the Klingon Fleet arrives or the lone cloaked Klingon Battle cruiser in orbit destroys the Enterprise and her crew. Three difficulty levels, random side missions, player strategies and a unique branching mission tree ensure every game will be a unique memorable experience.