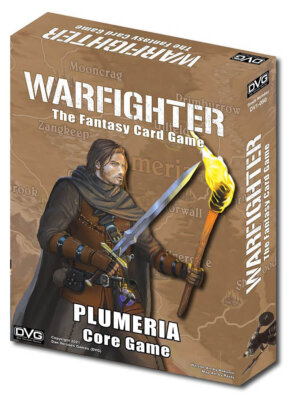 Yesterday Dan Verssen Games launched a Kickstarter for a new title in the Warfighter wargame series. Warfighter Fantasy takes the popular solitaire game to the fictional world of Plumeria as players will lead a band of adventurers across the land. This release is actually for one to six players so you can team with your friends to dungeon delve. The project is fully funded and you can reserve a copy of the core game for $55.00 through October 21st. Expected delivery is May of 2021.

Warfighter Fantasy expands the Warfighter series to the Fantasy Era!

Warfighter Fantasy is a card game for 1 to 6 players. You play cooperatively with your friends against the system to adventure through dungeons, slay evil monsters, and gain gold and glory!

Warfighter Fantasy is a stand-alone Warfighter boxed game! The game includes all the Heroes, Weapons, Equipment, Dungeons, Locations, Objectives, and Hostiles you need to fully explore the Nation of Plumeria.

The core game gives you a full adventuring group of Heroes and a nation’s worth of hostile creatures. Each Expansion pack adds depth and variety to your world.

As with all Warfighter products, Fantasy is fully compatible with all other Warfighter products. If you want to build a SEAL team armed with M4 Carbines and LAW Rockets and take them into a Fantasy Dungeon to see how they fair against a group of Orcs, a Spike Trap, a Troll, and a Fire Dragon, you can! Want to bring your Fantasy adventuring group into WWII to storm the D-Day beaches of Normandy, you can!

Warfighter Fantasy introduces the Quest Campaign strategic layer to the Warfighter series. In a Quest Campaign, your Heroes travel from town to town throughout Plumeria, and descend into its darkest dungeons to root out foul creatures of every shape and description.

With every victory, your Heroes gain experience, skills, and treasure, to allow them to enter even deeper dungeons, and destroy even more dangerous creatures.

Warfighter Fantasy is a card game for 1 to 6 players. You play cooperatively with your friends against the system to adventure through dungeons, slay evil monsters, and gain gold and glory!