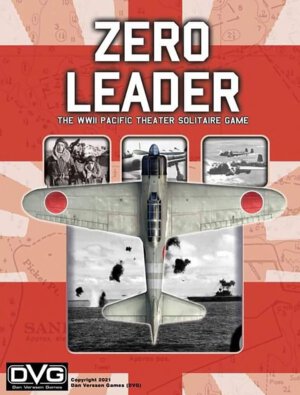 A new aerial combat Leader wargame Kickstarter was launched yesterday by Dan Verssen Games. Zero Leader places the player in command of a Japanese air squadron in the Pacific during World War Two. The project already funded in its first day. The game is solitaire, for ages 12+, and plays in 45-120 minutes. you can reserve a copy of the game and unlocked stretch goals for a $75.00 pledge through September 2nd with an expected delivery of February next year.

Zero Leader is based on the Corsair Leader game, with some significant changes. The game focuses on commanding and managing a Japanese aerial squadron in the Pacific in World War Two, with aircraft including the A6M2 Zero, KI-84 Frank, KI-43 Oscar, G4M Betty, and G3M Nell, covering the major campaigns throughout the war from 1941 to 1945.

You will need to select the right mix of aircraft under your command in order to successfully carry out the different types of missions. Each aircraft has its advantages and disadvantages. For example, a fighter like the Zero is very maneuverable and deadly to enemy Bandits, but it has limited ability to attack naval and ground targets, whereas a bomber like the Betty can carry a lot of munitions, but are susceptible to enemy bandit and anti-aircraft attacks.

This game also includes additional aspects of Japanese operations such as mechanical and maintenance challenges, invoking samurai spirit, as well as the ability to deploy the deadly Ohka kamikaze aircraft-bombs. There is also an air combat system which gives you more tactical options when dogfighting with enemy aircraft, including manuevering for position, increasing pilot aggression and being affected by the robustness of the aircraft.