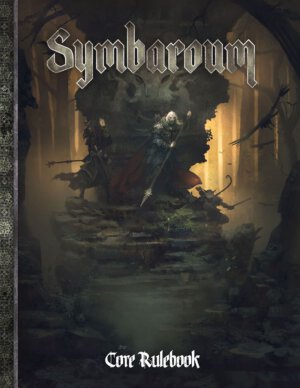 Modiphius just keeps them coming as Chris Birch recently announced the company has entered into a partnership with Järnringen to distribute their dark fantasy RPG Symbaroum. The print and PDF bundle of the system core book is available now for an MSRP of $50.99, or the PDF alone for $18.99, and the volume hits your FLGS in March.

Symbaroum invites you to join in the adventure! Explore the vast Forest of Davokar in the hunt for treasures, lost wisdoms and fame. Visit the barbarian clans to trade or to plunder their treasuries. Establish a base of power among princes, guilds or rebellious refugees in the capital city of Yndaros. Or survive encounters with Arch Trolls, dark-minded Blight Beasts and undead warlords. But whatever you do, never ignore the warnings spoken by the wardens of the forest: tread carefully and do not disturb the ruins of old, for the dark deep of Davokar is about to awaken.

◆◆ A fast-paced and flexible rule-set for creating player characters and acting in the game world.
◆◆5 playable races and 3 archetypes, divided into 15 occupations, as a basis for
character creation.
◆◆35 abilities, 25 mystical powers, 33 rituals and a large number of weapons and armors to make each character unique.
◆◆Detailed guidelines for how to create adventures; 38 monsters and adversaries, and 19 monstrous traits to arm the characters’ enemies with.
◆◆More than 50 pages describing the game world’s history, geography and cultures, focusing on four particular settings: the Forest of Davokar, the fortune hunter’s town of Thistle Hold, the Ambrian capital Yndaros and the cliff of Karvosti where the barbarian clans convene.
◆◆Symbaroum is a complete roleplaying game; all you need to play is paper, pen and a dice set.
◆◆This roleplaying game is suitable for all adventurous humans, goblins and trolls from the age of 12
Tags
Chris Birch Järnringen Modiphius Entertainment RPGs Symbaroum Tabletop Gaming
Show More
Share
Facebook Twitter LinkedIn Tumblr Pinterest Reddit VKontakte Odnoklassniki Pocket Share via Email Print