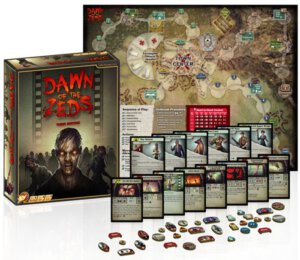 As I previously wrote, Victory Point Games had announced a third edition of the hot selling Dawn of the Zeds and as of 3pm EST today that project is live. I really have to say if you’re a fan of nail biting, solitaire zombie action any edition of Hermann Luttmann’s DotZ should be on your shelf but the time is now to pledge your support for Dawn of the Zeds Third Ediiton!

You can check out my reviews of both the first and second editions of the game.  This new revamp will make getting into the action much easier for newbies plus brings more baddies, options, and variants to long time fans of the game. You can even bring up to three other players along for the ride as the design is updated four up to four players! Right now you can get your hands on an early bird special with a $55 pledge and when the early birds are gone the standard pledge will be $65 through July 18th.

Plus how can you beat seeing Alan Emrich wax poetic about one of my favorite games?

Defend the city of Farmingdale and its citizens against hordes of Zeds in an effort to survive until the very end in Dawn of the Zeds!

Things are far from good in Farmingdale. Some kind of virus or poison is turning ordinary people into vicious, zombie-like killers. You must lead citizens and emerging heroes to halt the Zeds’ advances by (re)killing them, attempt to coordinate the discovery of a cure, and preserve as much of the area and as many of its inhabitants as possible. There’s no time to lose…

Dawn of the Zeds: Third Edition, by Victory Point Games, is a cooperative States of Siege board game for 1-4 players that plays in 90+ minutes. Your heroes must defend Farmingdale and its five outlying villages from the encroaching horrors. These heroes are supported by civilians (some armed, some heroic) and what little outside help is forthcoming. You must prevent the Zeds incursion from reaching the town center or causing so much chaos around Farmingdale that the government abandons it (and you)!

There’s a whole world to experience for players new to the apocalyptic city of Farmingdale. For players who have experienced Dawn of the Zeds in previous editions, there are plenty of new things to discover as well.