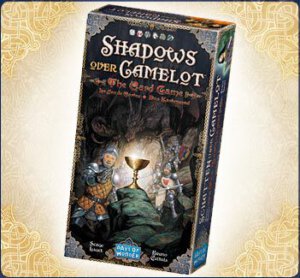 One of the most popular semi co-operative games out there is the long standing Shadows Over Camelot, from Days of Wonder, and now the card game based on that title is finally available for order. Shadows of Camelot: The Card Game looks to bring the same co-op vibe to a fast playing card game setting while still tasking the players to find the traitor in their midst. The game is for two to seven players (with a solo variant) and should be completed in around twenty minutes or so. The MSRP of the card game is $25.00 and if you order right now through Days of Wonder, you’ll receive two bonus cards – Morgan and Merlin.

Darkness has once again descended over Camelot; the Kingdom is no longer safe. Your illustrious father’s weapons have barely been retired to the armory and his revered coat of arms passed on to you when troubling rumors begin spreading anew…

“Troops are on a war footing – Saxons? Picts?”
“The French insulted us. They must hold the Holy Grail”
“Excalibur has vanished… Again!?”

Rise to the challenge and band together with your allies to dispel these rumours and defeat the Shadows. Surely there won’t be a Traitor amongst your friends this time around!

Shadows over Camelot – The Card Game follows in the footsteps of the original award-winning cooperative board game. As sons & daughters of the legendary Knights of the Round Table, players work together to defend Camelot and defeat the game’s threats, represented by a deck of Rumor cards that swirl around the kingdom. Once again, the Knights face Traitors in their midst as loyalties are tested… Using totally different mechanics from its board game namesake, the card game nonetheless recaptures all the epic tension and backstabbing treachery of its glorious predecessor!