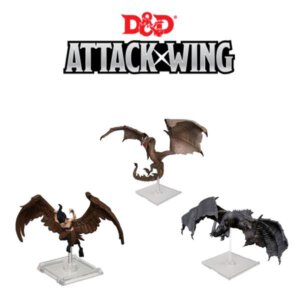 One of the cooler looking sneak peeks we got at this year’s Gen Con was catching a glimpse of some of the minis featured in D&D Attack Wing from WizKids. Now the title has hit stores and early indications are the dragon based miniatures game is flying (I guess the pun is intended…) off store shelves. The Starter Set, as well as expansions, are now available with the base set carrying an MSRP of $49.99.

I’ll be the first to point out nearly fifty bones seems a bit high for a game featuring three minis – although they are really sweet large scale minis – WizKids has a nice track record of producing fun games so I’ll guess you won’t mind dropping the dough.