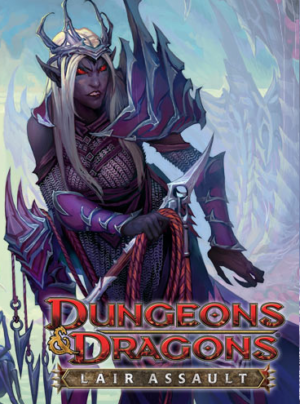 An all new Dungeons & Dragons Lair Assault is revving up at your favorite hobby stores and it looks to be a doozy for 9th level characters.

From Wizards of Coast:

It’s time to gather your master tacticians and rules experts together to kick down the dungeon doors and begin the assault!

See additional information about D&D Lair Assault: Spiderkiller below. To find a participating store near you, visit the Events Page on DungeonsandDragons.com.

Somewhere in the Lost Level of Undermountain, the fallen drow matron Shi’nayne is trying to open a way to the Demonweb. In this challenge, adventurers must brave the depths of Undermountain, onetime playground of the mad wizard Halaster Blackcloak, in order to stop her. If she succeeds, nothing will stop the Spider Queen and her armies from overwhelming Skullport, Waterdeep and the whole of Faerûn.

For this challenge, players create characters of 9th level, using any official 4th Edition D&D® products and materials.  Additionally, D&D Fortune Cards™ can also be used during the challenge to give players an added edge. As with previous challenges, players gain awards and earn glory for their characters, up to a total of 200.