Dead by Daylight: The Board Game Hits Kickstarter

Level 99 Games has launched a Kickstarter to produce Dead by Daylight: The Board Game. Bringing the popular video game to your tabletop, players will try to survive a night with a supernatural killer. The game is for three to five players, ages 18+, and plays in 30 to 60 minutes. You can reserve a copy of the retail edition of the game for a $49.00 pledge, or grab the collector’s edition for a $99.00 pledge, through April 21st. Expected delivery is this October.

In Dead by Daylight: The Board Game, a team of four resourceful Survivors face off against a single supernatural Killer in a high-stakes game of cat-and-mouse.

As one of four Survivors, explore the trial grounds, discover props, and utilize your unique perks as you work to uncover and repair generators. Repair four generators and open the exit games to escape and win! As a Killer, hunt down the survivors, wound them, and place them on sacrificial hooks to summon a sinister force. With enough sacrifices, you are able to appease The Entity and win!

Each turn, players will plan their moves by secretly selecting paths on the board to move along. Each time a player moves, they will reveal new features of the board, called props, which they can interact with to further their objectives or to hinder their opponents.

Survivors are able to utilize many different props to aid in their survival and navigation of the trial. Killers can make use of fewer props—instead, they interact with the Survivors using their attack or their unique power. Each Killer has a different power that will completely change the way the game plays.

Both Killers and Survivors have perks which grant them special abilities. Experienced players can customize their characters with various perk configurations, offering even more replayability.

Jeff McAleer
Founder/Editor-in-chief of The Gaming Gang website and host of The Gaming Gang Dispatch and other TGG media, Jeff tackles any and all sorts of games but has a special fondness for strategy, conflict sims, and roleplaying games. Plus, he's certainly never at a loss for an opinion...
Latest posts by Jeff McAleer (see all)
Tags: Dead by Daylight the Board Game, Kickstarter, Level 99 Games 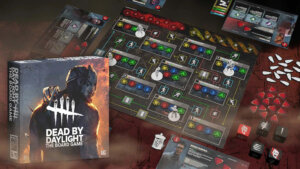 Dead by Daylight: The Board Game Hits Kickstarter

Level 99 Games has launched a Kickstarter to produce Dead by Daylight: The Board Game.
0
Awful