December brings four new Starfinder releases from Paizo Inc, including the latest chapter in the Horizons of the Vast adventure path. All of these releases are slated to hit stores on December 15th. 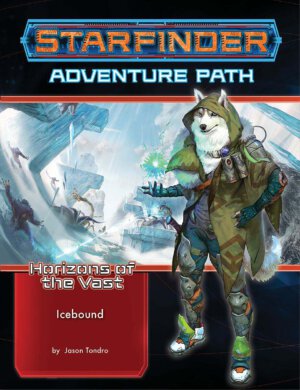 Starfinder Adventure Path #43: Icebound (Horizons of the Vast 4 of 6)

A distress beacon from a desolate section of tundra sends the heroes on a rescue mission in the biting cold. They find a lone vesk survivor in the wreckage of a starship prowled by a menacing insectile stowaway: a component of the dreaded Swarm! The heroes trace the creature’s origin to a frozen gas giant in the same system, where a mutated Swarm colony has begun to awaken from a strange hibernation. Will the heroes brave the floating organic lair to stop the Swarm from contacting the greater hive mind?

“Icebound” is a Starfinder Roleplaying Game adventure for four 7th-level characters by Jason Tondro. This adventure continues the Horizons of the Vast Adventure Path, a six-part, bimonthly campaign in which the heroes are at the forefront of exploring and charting a newly discovered world filled with mystery. This volume also includes a dossier on the Veskarium spy agency known as Directive-9, technology repurposed from the Swarm, and a selection of deadly alien threats.

Each bi-monthly full-color softcover Starfinder Adventure Path volume contains a new installment of a series of interconnected science-fantasy quests that together create a fully developed plot of sweeping scale and epic challenges. Each 64-page volume of the Starfinder Adventure Path also contains in-depth articles that detail and expand the Starfinder campaign setting and provide new rules, a host of exciting new monsters and alien races, a new planet to explore and starship to pilot, and more! 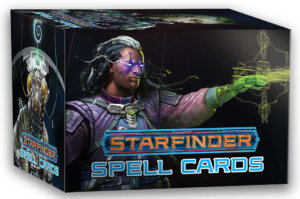 Hold the magic of the galaxy in your hands with Starfinder Spell Cards, the must-have accessory no superior science-fantasy spellcaster can do without! More than 250 sturdy spell reference cards, covering every spell in the Starfinder Core Rulebook and Starfinder Character Operations Manual, give players instant access to key game details at a glance! 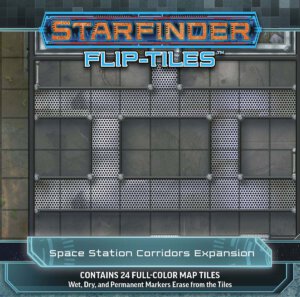 Next time your players head for the far side of the space station they’re visiting, they won’t have to wait while you draw every hallway intersection and maintenance tunnel.

Suitable for experienced GMs and novices alike, this product fits perfectly into any Game Master’s arsenal. Wet, dry, and permanent markers erase from the tiles! These double-sided city tiles come in convenient packaging for easy storage. 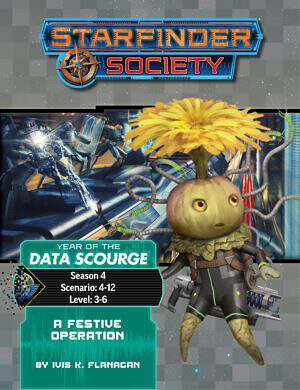 Regarded by many as the cultural center of the Pact Worlds, Absalom Station plays host to hundreds of different holiday traditions each year, shared by the hundreds of diverse species who live and work there. But while holidays are normally a time for celebration, not everyone’s feeling particularly festive. A whimsical raxilite appears to a group of fledgling Starfinders and asks them for help in spreading cheer. The Starfinders are tasked with doing a few good deeds for Station residents and experiencing three different Pact World holidays.

The PDF will be available digitally for $5.99.