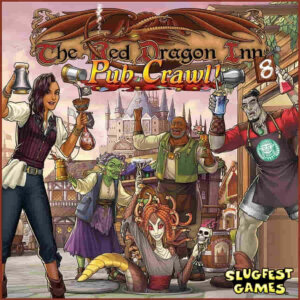 The latest game release from SlugFest Games will arrive just in time for the winter holidays. Red Dragon Inn 8: Pub Crawl! is a standalone addition to the series as the players characters will travel to various taverns and inns. The game is for two to four players, ages 13+, plays in around 30 to 60 minutes, and will carry an MSRP of $39.95 when it arrives in December.

A new standalone expansion to the award-winning series! Our illustrious heroes have spent many an hour (and many a coin!) at Greyport’s legendary tavern, the Red Dragon Inn. But even the most loyal customers want a change in scenery once in a while…So what do our heroes do when the same four tavern walls are getting a little dull? Pub crawl!

The Red Dragon Inn 8 introduces five new characters—the proprietors of five brand new taverns, plus a new play variant where players can travel around to multiple taverns rather than staying at the Red Dragon Inn.

The Red Dragon Inn characters bar hop to other taverns and inns of the town (The Black Dragon Depths, The Harmonious Cup, Lucky’s Rolling Barrel, The Scurvy Dog, Startusk’s), discovering new drinks and characters (the tavern owners: Father Farai, Lucky the Scofflaw, Nerodia the Petrifier, Phyll Startusk, Samantha the Bookie). Each pub adds its own twist to the rules. Whenever a player reveals a Drink that includes one or more Chasers, the party pawn moves to a different open tavern after the Drink and any other pending effects are finished. Each tavern has an event that is triggered as the party arrives there. It also has its own Drink deck, and once that is exhausted, the tavern closes. The party crawls back to the Red Dragon Inn only once all other taverns have closed.