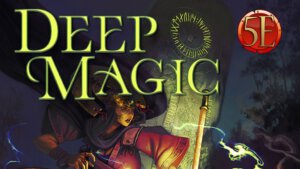 Kobold Press is aiming to bring over 600 new spells to 5th edition Dungeons & Dragons with the Deep Magic tome. Including many of the magical entries from previously released Deep Magic 5E series entries over the years, this new book promises over 300 full color pages of magical goodness. The project is currently past the 350% funding level and you can reserve a copy of Deep Magic in PDF for a $25.00 pledge, or in hardcover (with the PDF) for a $49.00 pledge through October 30th. Expected delivery of the book is April 2020.

A grimoire of over 600 new 5th Edition spells, subclasses & wizardly options for unlimited spellpower from battle magic to void magic!

H.P. Lovecraft invented the Necronomicon. Dungeons & Dragons had its Unearthed Arcana, and every fantasy RPG has a grimoire worth of rituals, summonings, and cantrips. No matter how you slice it, magic is at the heart of fantasy. Nothing says magic like a massive tome of spells.

That’s exactly what we’re compiling here. A tome collecting, updating, tweaking, and expanding every awesome spell, cantrip, and glamour derived from years of the Deep Magic for 5th Edition series—more than 575 new and compiled spells by the best in the business, including Wizards of the Coast staffers and A-list freelancers. And we’re adding a lot more to that list: divine domains, new arcane subclasses, expanded familiars and conjured servants, and yes, even more new spells.

This project is not just for wizards and sorcerers. Deep Magic expands the horizons of what’s possible for wizards, sorcerers, clerics, and even for rangers and paladins. It

offers something new for every casting class, from alkemancy to druid rituals, and from bard to warlock!

Deep Magic is the ultimate sourcebook for new and variant magic in any fantasy setting, offering over 300 full-color pages. Those pages feature:

Deep Magic starts by compiling almost every spell published in the Deep Magic series for 5th Edition in the last few years (yes, we did cut a few stinkers!). Better still, this volume updates and expands these spells, to include clarifying errata and revised versions based on player feedback, to improve language, and to update some of the earliest ones to make better use of 5th Edition language and formatting.

Deep Magic also includes more than 100 additional, all-new spells designed by Jeff Lee, Wolfgang Baur, Matt Corley, Kelly Pawlik, Shawn Merwin, Steve Winter, and others–spells that never appeared in the Deep Magic series itself! It will also include dozens of spells written by backers—fully reviewed, developed, and refined by Kobold Press, of course. (And yes, we reserve the right to throw any bad ones out!)