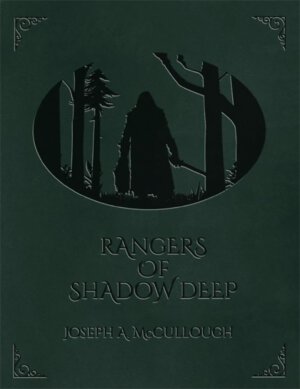 The popular fantasy miniatures skirmish game Rangers of Shadow Deep is going to see a brand new, deluxe edition from Modiphius Entertainment in early 2020. The hardcover book will provide updated rules and mechanics while also including an initial adventure for your rangers to complete. The 136 page book is available as a pre-order right now for $47.08 (the exchange rate might vary) and immediately receive the PDF. The physical book is slated for a February release.

A kingdom stands on the brink of destruction, as the vast realm called the Shadow Deep slowly swallows everything in its path. As the army fights to contain the tide of evil creatures teeming up out of the black clouds, the kingdom’s best soldiers, the rangers, must venture down into the shadows to gather information, rescue prisoners, and ambush enemy supply lines. It is a desperate fight against overwhelming odds, but every little victory brings another day of hope.

– Solo and co-operative tabletop miniatures game from the creator of Frostrgrave and Ghost Archipelago Joseph A. McCullough

– Create your ranger, gather companions, and play through a series of missions in a fight to hold back the darkness.

– Survive and you will grow in power and ability, and be sent on more difficult, dangerous and intricate assignments.

– New ‘Challenge Levels’ for all the scenarios can be used when playing with 3 or 4 rangers to ramp up the difficulty, or if you want to replay the scenario with a higher-level Ranger.

This Deluxe edition also includes the first supplement for the game, Burning Light. The Rangers’ must venture to a ruined convent, searching for an ancient artefact. As they choose what order to explore the ruins, they must gather clues to the artefact’s location. But they must be quick, for the longer they remain, the more the forces of the Shadow Deep become aware of their presence.

This book contains the rules only, requires a couple of twenty-sided dice, a deck of standard playing cards, inch ruler and miniatures to play!