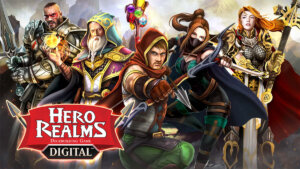 Earlier today Wise Wizard Games launched a Kickstarter to bring the Hero Realms deckbuilding game to digital. The fantasy game has a variety of ways to play including a cooperative mode where the players team against a big bad. You can reserve a copy of the game for Android, iOS, or Steam for a $25.00 pledge through July 29th with access to the beta to follow soon after the project closes.

I happen to like the physical edition of Hero Realms quite a lot and you can check out my review right here.