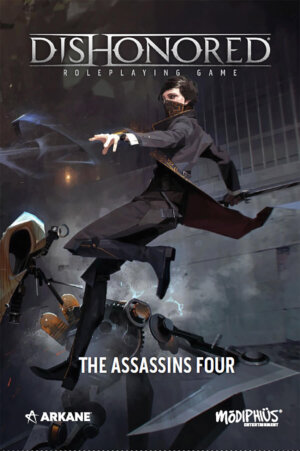 Modiphius Entertainment has released the first adventure for Dishonored: The Roleplaying Game. The Assassins Four takes the characters into the streets of Dunwall in a tale of assassination and mystery. The 15 page PDF is available at DriveThruRPG for $5.00.

Find yourself entangled in a plot of murder and politics with The Assassin’s Four. This 15-page adventure by Alison Cybe has your group aiding the Bottle Street gang and involving themselves in an assassination plot, complicated by political and personal motivations. Can they prevent the schemes of one of Dunwall’s distinguished aristocrats, or will they too fall prey to the alure of the lofty offers that such a person can bestow? This adventure works standalone or can be used as part of an existing campaign and has a host of interesting NPCs that could become future enemies or allies for the party.