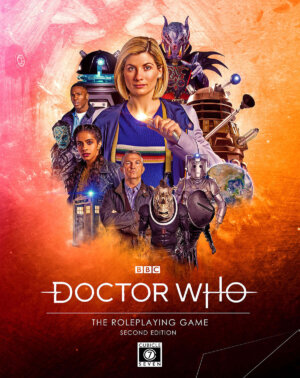 Cubicle 7 Entertainment has just released the Doctor Who: The Roleplaying Game Second Edition in PDF and are currently taking preorders for the physical hardcover. This new edition promises a faster pace and an entry point for gamers of all experience levels. Climb aboard the TARDIS and get ready to thwart the evil machinations of the Cybermen, Daleks, Sontarans, The Master, and more! The 256 page hardcover core book is available as a preorder (which includes the PDF) for $49.99 or grab the PDF alone at DriveThruRPG for $29.99. Expected release for the physical book is Q1 of 2022.

The award-winning Doctor Who: The Roleplaying Game has regenerated into a new Second Edition that is faster, easier, and even more exciting. This book presents all the rules and background you need to voyage across space and time with the Doctor, or as new characters experiencing brand new epic adventures.