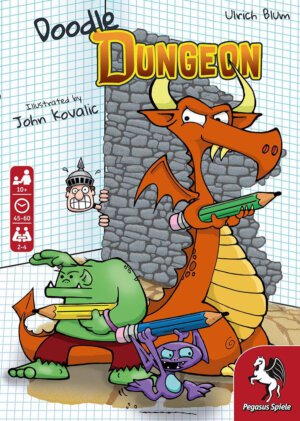 In March Pegasus Spiele will release an interesting looking game, Doodle Dungeon. Featuring art from John Kovalic, the game invites players to both design and defend their dungeon. Doodle Dungeon is for two to four players, ages 10+, plays in around 45 to 60 minutes, and will carry an MSRP of $29.99 when it arrives March 15th.

A visit to the dungeon can be quite the tormenting affair on the hero side of life, so why not switch sides and become a certified dungeon architect instead? In Doodle Dungeon, each player works on their own dungeon blueprint. Drafted cards determine which elements — monsters, traps, and treasures — they have to add immediately. After fourteen cards have been drafted, the blueprint is passed to the next player, who then draws the route an anthropomorphic test hero will take because these days, even in the dungeon business, nothing works without quality inspection. The players receive their own blueprints back and try to keep the dummy hero from killing their monsters, stealing their treasures, and — obviously — making it out alive. They can use the drafted cards to fight off the hero or to support the heroes in their opponent’s dungeons. In the end, only the creator of the most devious dungeon will triumph.

Doodle Dungeon combines the rewarding elements of creating, then defending one’s own dungeon, and mixes it with engaging draft-and-draw gameplay.