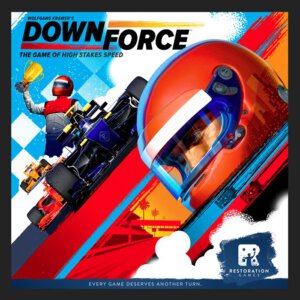 The well received retro-revision racing game Downforce will be roaring into stores worldwide in 2018. Restoration Games has announced an agreement with Iello to provide foreign language editions of the open wheel race title. A French edition is first up on the agenda for 2018. Downforce is for two to six players, ages 8 and up, plays in 30 – 45 minutes, and carries an MSRP of $40.

Restoration Games and IELLO announced a deal to bring Downforce to the rest of the world. Released by Restoration Games at Gen Con this year, Downforce has been met with near universal praise for its quick play, high player interaction, and top-notch components. Wolfgang Kramer’s original design was featured in such titles as Daytona 500, Top Race, and Detroit- Cleveland Grand Prix. This new version was restored by Rob Daviau.

Justin D. Jacobson, president of Restoration Games said, “We are committed to bringing the very best we have to every game we release. The finest art, components, and play. Naturally, when we began looking for a partner for foreign-language publication, we were adamant that it be an organization equally committed to those ideals. We know IELLO is just that company, and we’re delighted to be working with them.” Under the agreement, IELLO has the right to publish in every territory outside the United States. The company already has plans to publish a French version in 2018 and is looking at other versions as well. “IELLO is proud and excited to add a new title brought by Rob Daviau to its catalog. Thanks to our strong partnerships on all continents, we are ready to bring new buzz and love around this game outside of the USA,” said Romain François on behalf of the company.