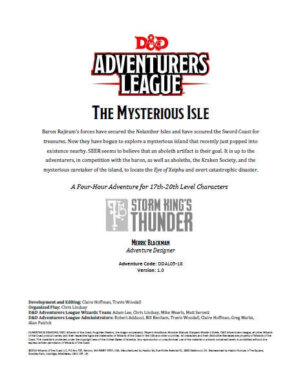 Score the latest Stay at Home, Play at Home Dungeons & Dragons release from Wizards of the Coast. In D&D Adventurers League: The Mysterious Isle, the heroes are in a race against time versus multiple factions to recover a powerful artifact. The adventure is for high level characters and you can download the 31 page PDF from Dungeon Masters Guild for free through June 16th.

Baron Rajiram’s forces have secured the Nelanther Isles and have scoured the Sword Coast for treasures.

Now they have begun to explore a mysterious island that recently just popped into existence nearby. SEER seems to believe that an aboleth artifact is their goal. It is up to the adventurers, in competition with the baron, as well as aboleths, the Kraken Society, and the mysterious caretaker of the island, to locate the Eye of Xxiphu and avert catastrophic disaster.