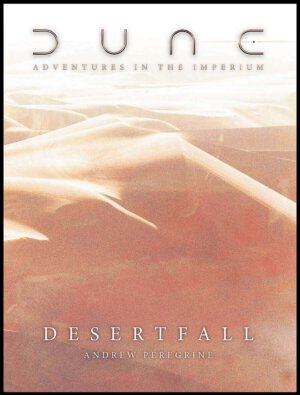 Modiphius Entertainment has released the first adventure for the Dune: Adventures in the Imperium roleplaying game. Originally included in the corebook preview, Desertfall places the player characters in the roles of a vanguard preparing Arrakis, and the city of Arrakeen, for the arrival of their House. The 34 page Dune: PDF is available at DriveThruRPG for $4.99.

This 34-page introductory adventure for the Dune: Adventures in the Imperium roleplaying game brings the player characters to Arrakis to prepare for the arrival of House Atreides. Soon after planetfall, the player characters must ensure the official Residency is secure and try to unearth any spies, assassins, or other potential threats that may be lurking in Arrakeen.

Desertfall can be played using the pregenerated characters included, but will work equally well with a new group of player characters from a different House.

This new version of Desertfall has undergone a few small changes since its release as part of the Corebook Preview. We have adjusted the presentation of some characters, but we’ve also taken the opportunity to offer new guidance about adapting this adventure to an ongoing campaign with a House of your own, and included additional notes on how to continue the adventure if some of the sub plots are not resolved.

As it is no longer a preview, Desertfall no longer contains any of the Rules or Setting information. We assume the reader has access to the Dune: Adventures in the Imperium Core Rulebook.