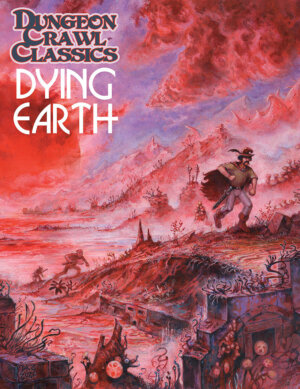 Jack Vance’s classic fantasy series is receiving the Dungeon Crawl Classics roleplaying sourcebook treatment from Goodman Games. Now up on Kickstarter is the Dungeon Crawl Classics Dying Earth boxed set, which features everything judges and players will need to dive into action and adventure on a far future as our sun burns out. The boxed set will contain three books. The project is well past 500% funding in its first day and you can reserve a copy for a $50.00 pledge through July 21st.

A Boxed Set for DCC RPG

“In ages gone,” the Sage had said, his eyes fixed on a low star, “a thousand spells were known to sorcery and the wizards effected their wills. Today, as Earth dies, a hundred spells remain to man’s knowledge, and these have come to us through ancient books… But there is one called Pandelume, who knows all the spells, all the incantations, cantraps, runes, and thaumaturgies that have ever wrenched and molded space…”

Welcome to the fantastic world of Jack Vance’s Dying Earth! This Kickstarter funds the production of a deluxe DCC Dying Earth boxed set, officially licensed by the estate of Jack Vance. The boxed set is packed with everything you need to begin adventuring in the Twenty-first Aeon, including four new classes, dozens of new spells, new monsters and more. Plus there are six brand-new adventure modules to get your campaign started!

The Dying Earth is a fictional future set in the distant twilight of the earth, as the dim red sun sheds its last life. At the end of the world, magic is indistinguishable from technology. Bickering magicians squabble over supernatural treasures, their minds filled to bursting with as many complex magical formulations as they can memorize, and they employ the services of strange creatures to best their rivals.

What’s In the Boxed Set?

The boxed set contains three books, a map, and more. 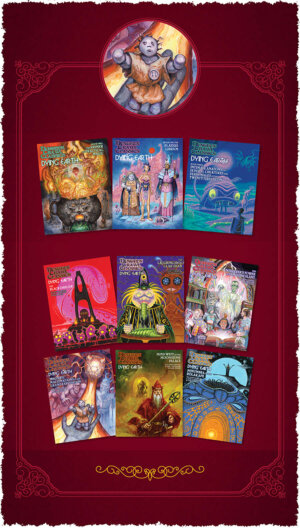 Player’s Libram: Provides information for players and judges on the setting and on creating new characters, including four new classes for DCC RPG: the magician, vat-thing, wayfarer, and witch. Plus habiliments of obvious efficacy for the discerning adventurer, thaumaturgical curios, rules for grudge tokens, and a comprehensive survey of all the aeons: notable events, personages, and places.

The Primer of Practical Magic: Details the history and use of magic in the Twenty-first Aeon and includes new rules for spell creation along with 35 new spells, 14 new curses, and extensive rules for magical campaigns: objurgations, manse-building, magical associations, equipoise and exactitudes, sandestins, demonic corruption, and more.

The Intimate Anatomy of Several Creatures and Personages of the Twenty-first Aeon: Presents new creatures, patrons, and magical instruments for use in campaigns set in the Dying Earth setting, including four new patrons and 12 new patron spells; talismans, amulets, and instruments, both minor and major; a codex of three dozen creatures monstrous and mundane; and many appendices articulating the details that make the Dying Earth so special: games of chance, provisions and viands, and more.

Plus there are six new adventure modules. Pledge now to receive copies with Kickstarter-exclusive foil title printing at a special early supporter discount!