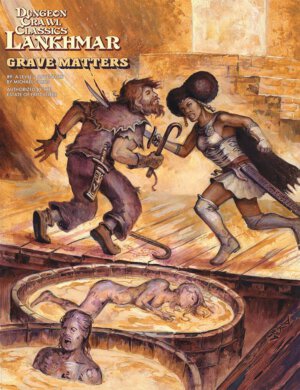 A Level 2 Adventure Set In Lankhmar!

Skullduggery and sorcery in the streets of Lankhmar! Herein you will find two adventures set in the seedy underworld of the city.

In the first, the party must steal back a stolen sarcophagus from the grips of a macabre smuggling ring. The second concerns a band of questionable heroes thrown together by misfortune who must fight their way out of an unearthly wizard’s lair—a perfect way to start a new DCC Lankhmar campaign!

Both demonstrate that there’s no dearth of thrills, dangers, and, of course, wealth to be found in (and under) the city of Lankhmar. Do you have what it takes to make it through the night?

D&D Dungeon Mayhem: Monster Madness – How to Play and Review

Starfinder Deck of Many Worlds – Unboxing and First Look