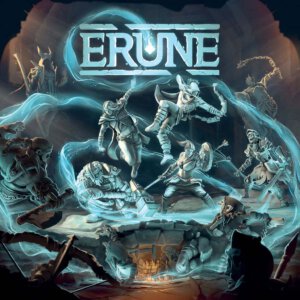 Following a successful Kickstarter, Arkada Studio will be releasing the dungeon delving board game Erune in early 2022. The game features a voiced assistant to the DM which provides deeper immersion for the players. Erune is for two to five players, ages 12+, plays in one of two hours, and will carry an MSRP of approximately $99.00 when it arrives in early 2022.

Erune is a board game based on the classic dungeon crawler to which it adds a modern technology: a vocal application.

1 to 4 players face off against a Dungeon Master (DM) and play as adventurers who will evolve at their own pace during a campaign of quests. The DM sets the stage for quests in which the heroes will face many challenges. It has an arsenal of monsters, traps, curses, and talents of all kinds. Winning the quest will make him more powerful because, like the heroes, he gains levels and evolves.

Erune is a modern homage to the classics of the 90s such as Heroquest or more recent ones like Descent and Claustrophobia, but he doesn’t forget to forge its own identity. Indeed, the Spirit of Erune, the vocal assistant, seconds the DM, interacts with the players and gives the game all its originality.

No more huge rule books! The Spirit of Erune has been developed to answer all your questions about the rules and game’s world. Whenever you need a clarification, ask him directly: “how do I use my mana? what are the characteristics of the healing potion? how much experience does a goblin bring?” … Ask the Spirit, she’ll answer you in a second!

The Spirit of Erune manages quest events, whether it’s encounters with NPCs or puzzles, the choices made by the players influence the rest of the story and make each game unique and replayable. Spirit also generates random events throughout the quest.

The Spirit of Erune is also in charge of all quest actions. When a player searches for treasures, the Spirit announces in a few moments the unique result generated by the random combination of multiple data from the database.