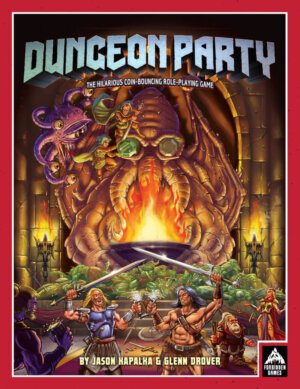 An interesting looking dexterity/pub style roleplaying game hybrid is up for Kickstarter funding for Forbidden Games. In Dungeon Party, players will lead their fantasy characters on an adventure to defeat the big bads and gather plenty of treasure by way of a “Quarters” style coin flipping game play. The game is for two to eight players, ages 8+, and plays in around 30-60 minutes. The Kickstarter is 300% funded and you can reserve a copy of the base game, without stretch goals, for a $19.00 pledge or go all in (and get everything) with a $59.00 pledge. The expected delivery for Dungeon Party is September 2020.

Dungeon Party is a quick-play fantasy role playing game played with coasters and a coin.

Dungeon Party is easy to learn, playable in a short time (or extended if that is desirable), has all of the aspects of a classic RPG adventure, and is playable in a bar, restaurant, or at home. The combat mechanic is fun and adds an element of luck and skill without much complexity. The game system is infinitely expandable.

Players will assemble a ‘Dungeon’ by creating a stack of coasters that include rooms, monsters, and treasures. They then adventure through the dungeon by battling through each room, defeating the monsters, and looting the treasure. Along the way, they may pick up magical treasures or spells that can help them in their quest. If they survive the dungeon, the player with the most treasure points wins. If they do not, the Dungeon wins. But either way, there will be laughs and maybe even a drink or two!