Following what in essence was a soft launch at last week’s Gen Con (Wizards of the Coast didn’t even have a booth in the Exhibitor’s Hall but in one of the gaming halls instead) the first wave of hard cover releases of the 5th Edition of Dungeons and Dragons are now on your FLGS shelves. The Player’s Handbook clocks in at 320 pages with an MSRP of $49.95 and Hoard of the Dragon Queen is the first part of a two part campaign consisting of 96 pages with an MSRP of $29.95.

Stay tuned for my reviews of both products very shortly! 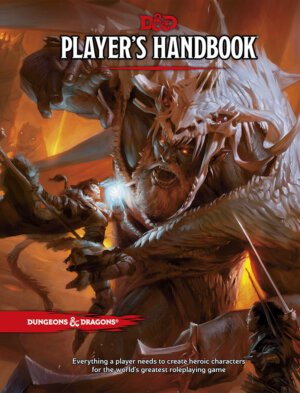 Everything a player needs to create heroic characters for the world’s greatest roleplaying game.

The Player’s Handbook is the essential reference for every Dungeons & Dragons roleplayer. It contains rules for character creation and advancement, backgrounds and skills, exploration and combat, equipment, spells, and much more. Use this book to create exciting characters from among the most iconic D&D races and classes.

Dungeons & Dragons immerses you in a world of adventure. Explore ancient ruins and deadly dungeons. Battle monsters while searching for legendary treasures. Gain experience and power as you trek across uncharted lands with your companions.

The world needs heroes. Will you answer the call? 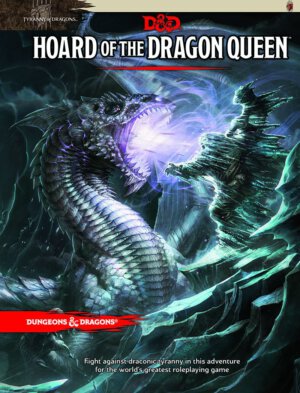 Hoard of the Dragon Queen

Fight the war against draconic oppression in this adventure for the world’s greatest roleplaying game.

In an audacious bid for power, the Cult of the Dragon, along with its dragon allies and the Red Wizards of Thay, seek to bring Tiamat from her prison in the Nine Hells to Faerun. To this end, they are sweeping from town to town, laying waste to all those who oppose them and gathering a hoard of riches for their dread queen. The threat of annihilation has become so dire that groups as disparate as the Harpers and Zhentarim are banding together in the fight against the cult. Never before has the need for heroes been so desperate.