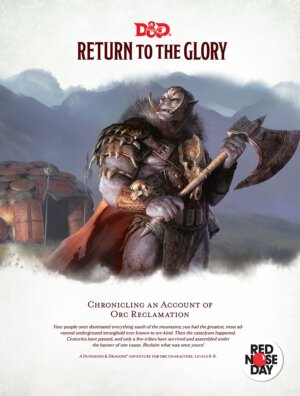 A new Dungeons & Dragons adventure has been made available by Wizards of the Coast as a download to benefit Red Nose Day 2020. In D&D: Return to Glory, the players’ orc heroes look to reclaim the lost glory their tribes once held by way of a centuries old underground stronghold. The special 38 page PDF is tailored for orc adventurers of 6th to 8th level and can be had at Dungeons Masters Guild for $9.99.

Your people once dominated everything south of the mountains; you had the greatest, most advanced underground stronghold ever known to orc-kind. Then the cataclysm happened. Centuries have passed, and only a few tribes have survived and assembled under the banner of one cause. Reclaim what was once yours!

This adventure is designed for four to six orc characters, levels 6 to 8.

All proceeds from your purchase are donated to Red Nose Day.

Red Nose Day is a campaign with the mission to end child poverty by funding programs that keep children safe, healthy, and educated. Through the power of entertainment, they bring people together to laugh and have fun, all while raising life-changing cash for the children that need it the most. Since their debut in 2015, they have raised $200 million and have positively impacted over 25 million children in America, and around the world.