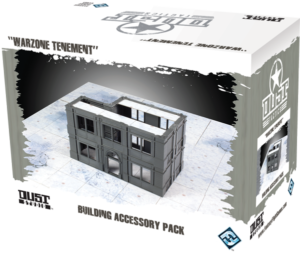 Fans of Dust Tactics, from Fantasy Flight Games, should be pleased to know that they’ll now have the opportunity to build up their terrain elements with the Building Accessory Pack. I did have a chance to check out the buildings at Vul-Con 2012 and I can say they look mighty sharp!

One of the many exciting features of Operation “Cerberus” is the modular, mutli-level structure it includes. This structure set introduced new strategies to the game, and soon you’ll be able to add even more structures to your games of Dust Tactics with the new Building Accessory Pack.

This expansion contains two more structure levels that can be used to build an urban battlefield for Dust Tactics. Dive into cover and clash with your opponents at point blank range with this new expansion.

Another level of warfare

Easy to assemble into a host of different shapes and sizes, the Building Accessory Pack will have you fighting in an urban warzone in no time. Strike down your foes from the rooftops. Blast away at troops hiding behind protective brick walls. Lead risky hand-to-hand assaults in the dilapidated hallways of once great buildings. The Building Accessory Pack allows you to do all of this and more!

Dig in and gain the benefits of heavy cover when you position units inside buildings. Even the most determined foe faces difficulties when trying to oust a squad from a fortified structure. Additionally, the higher levels of structures provide more protection, as units on the ground will find their weapons lack the range to hit targets far above the ground. Meanwhile, troops inside the building literally rain down fire on the units below.

When the battle moves inside a structure, units can fire through floors and ceilings to cripple their enemies. Since close combat can only take place between units on the same level, taking refuge at the top of a structure during a gorilla or zombie invasion creates plenty of opportunities to wipe out the threat before it reaches your forces.

Ready yourself to fight for new objectives with the Dust Tactics Building Accessory Pack, which will be available late second quarter of 2012.