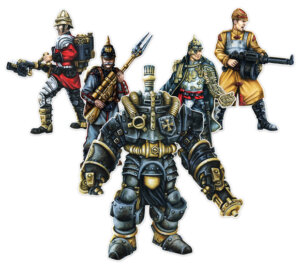 Spartan Games has announced their plans to begin shipping their highly anticipated 28mm combat game set in the Dystopian Wars universe on October 31st. Dystopian Legions will begin with four faction being made available: Prussian Empire, Kingdom of Britannia, Federated States of American and Empire of the Blazing Sun. The rules for Dystopian Legions will be made available as a free download at launch and come included with each faction box as well. Later, the rules will be expanded into a hard bound book featuring loads of photos. Starter sets of 12-14 figures will retail for an average price around $70.

Dystopian Legions is a fast-paced, action-packed 28mm scale tabletop game set in the exciting world of Dystopian Wars, where Victorian super science fiction has created a fascinating and brutal arena for a deadly world war.

Having brought carnage to the Dystopian battlefields with giant tanks, massive airships and technologically advanced naval vessels it is now time to get up close and personal with your warfare. It is up to your platoons of infantry to storm enemy positions, capture towns, secure strategic objectives and devastate rival nations.

Infantry sections are the building block of Dystopian Legions, but we’ve created so much more for gamers to build their armies with. Also available for battlefield commanders will be elite infantry units, section upgrades, mechanised walkers, tankettes, armoured personnel carriers and special characters, such as leaders and scientists who can inspire your men and cause fear in the enemy.

The game is scalable from a small number of models right the way up to a full blown company of men with armoured support. A modular approach to army building guarantees the game embraces further new releases and game expansions. Dystopian Legions will feature a range of high quality pewter and resin models. 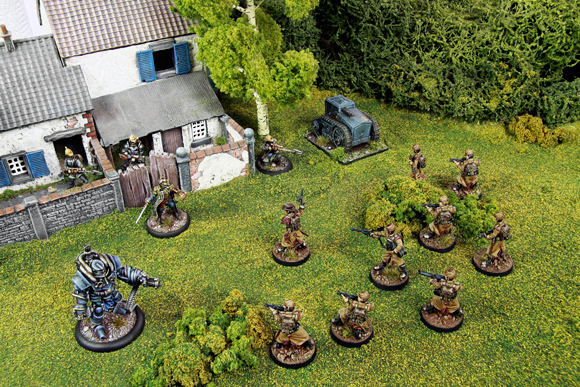 Spartan Games to Produce Miniatures Games Based on ‘Halo’