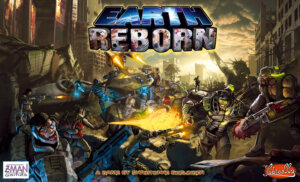 Coming very soon (as in now) from Z-Man Games is Earth Reborn.  In a post-apocalyptic future, two factions fight to become the supreme force on the new earth.

Earth Reborn is a scenario based game,where the players learn the rules as they move from scenario to scenario.  I’ve always found this a great way to learn an involved ruleset.  You get up and running within minutes, and slowly add on more rules as you play the game more.

The two factions are Norad (ex-military, scientists and engineers) and the Salemites (occultists who raise the dead).   The scenarios are in the form of missions where each side has their own objectives.  There are nine scenarios included in the game, each one teaching you a little bit more.

The most intriguing part of the game though is the use of  S.A.G.S. (Scenario Auto Generation System). Once you have played through the included scenarios, you can build your own using S.A.G.S.   The system is designed to generate a thematic story-based scenario including buildable maps and mission cards with objectives to make each one different and promising a lot of repayability.

A few companies are experimenting on their own “Generate different thematic story scenario” systems.  I know Fantasy Flight did this in “Andriod” and is improving on it in “Mansions of Madness“.  I do not know if this is Z-Man’s first attempt, but I am glad to see the concept spreading and I am really looking forward to trying it.

The game also features 12 detailed miniatures on a base that looks similar to Heroclix, without the clix part.  The game is due in stores now or very soon.  Some stores have already started to receive their copies, so better reserve yours now.