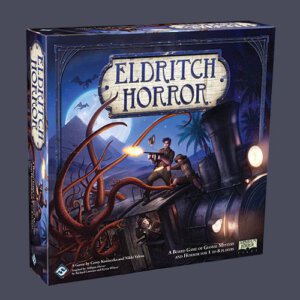 Fans of Arkham Horror and other H.P. Lovecraft influenced games from Fantasy Flight Games should be excited Eldritch Horror will be arriving soon. The game looks to be more of an introductory title for gamers looking to experience the Cthulhu Mythos and is even suitable for solitaire play. Eldritch Horror will carry an MSRP of $59.99.

In Eldritch Horror, one to eight players take the roles of globetrotting investigators, who must work together to solve mysteries related to an Ancient One – an elder being intent on global destruction. Along the way, you’ll gather clues, encounter strange and mysterious circumstances, battle monsters, and embark on daring expeditions. Do you have the courage to save the world?

Eldritch Horror is a race against evil that spans the entire world. You and your group of investigators will travel to the world’s major cities, its most remote wildernesses, and everywhere in-between while working to prevent the impending global doom.

Every element of Eldritch Horror is designed to immerse you in its narrative theme of world-spanning horror and adventure. As the game unfolds, the narrative woven throughout each and every mechanic intensifies the pressure.

As you and your fellow investigators work against all odds to hold back the approaching horror, foul monsters, obscure mysteries, and brutal challenges will take you to your limit and beyond. With terror spreading around the globe, you’ll be embroiled in this single, last-ditch effort to save humanity from complete ruin. Tensions run high, and the fate of the world is in your hands in these last, desperate days. The choices your group makes could have devastating consequences. Even the components of Eldritch Horror add to the story and further immerse you in this epic, world-spanning adventure. Character sheets resemble well-worn passports. Tokens look like train and ocean liner tickets. Even the game board displays a yellowed map of the world. Every piece in Eldritch Horror works together to weave an engaging tale of a global odyssey to save civilization.

Wind your way through the bustling metropolises of San Francisco or London where you may find yourself head to head with the crime syndicate, or fight for your life against vicious monsters on a remote island. Venture into the Heart of Africa in search of an ancient relic of untold power. No matter where your journey leads, you must always be on the lookout for the signs and clues which could help you achieve your ultimate goal: solving the mysteries surrounding the horrific Ancient One, whose arrival draws nearer with each passing day. Solve Mysteries, Save the World

Each loathsome Ancient One is shrouded in secrecy, and each comes with a unique deck o f Mystery cards, which draws you and your group of investigators ever deeper into the narrative. The tasks on these Mystery cards, along with the locations of otherworldly gates, menacing monsters, and helpful clues will inform both your travel plans and the dangers you confront.

Each Mystery card presents a new objective to complete, and each mystery you solve will bring you one step nearer to preventing the destruction of our world. With clues scattered across the globe, you’ll find adventure no matter where you travel. Maybe you’ll need to explore the vast expanse of Tunguska to research a strange comet, which seems to coincide with the rumblings of ancient evil. Perhaps, you’ll be tasked with discovering what lies behind the veil between our world and other, strange, dimensions.

Only by solving mysteries specific to the Ancient One you face will you and your fellow investigators be able to prevent impending doom.

While you must always work toward solving the strange mysteries of each Ancient One, the Mystery deck is not the challenge you will face. In fact, it’s only the beginning…

Eldritch Horror includes several features designed to ensure a unique experience each and every time you play. Each Ancient One has dedicated decks of Mystery and Research cards, as well as a blueprint for building the Mythos deck, so you’ll not only select an Ancient One to oppose, you’ll select an entire style of play. You can customize your experience even further by scaling the difficulty of the Mythos deck. Newer players may wish to stand against the Great Old Ones with less difficulty, while more experienced players may want an extra challenge. Eldritch Horror accommodates the needs of all types of players with its Mythos cards. With three levels of difficulty, and you can remove the easier or more difficult Mythos cards to make the game more or less challenging when you build the Mythos deck.

Furthermore, you can choose from any of twelve investigators ready and willing to join the fray, and face the challenges of more than three hundred cards. You’ll never play the same game twice! Prepare To Save Our World

Visit our description page to learn more about the coming horror. Then, keep checking back in the coming weeks as we present previews. Can’t wait to play? Find us at Gen Con 2013, August 15–18th, at booth number 819, where we’ll be running demos of Eldritch Horror!

The mysteries of Eldritch Horror will spread to retailers everywhere in the fourth quarter of 2013, so get ready to save our world from the impending rise of the Ancient Ones!