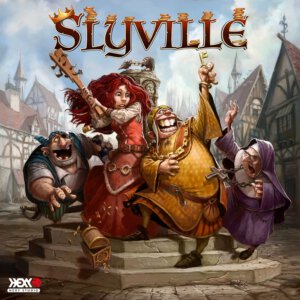 A new game of dirty deals and trickery is on the horizon from Ares Games and Hexy Studio. In Slyville, players will each lead a medieval guild as they try to close shady deals in order to increase their influence and power in their city. The game is for three to five players, ages 10+, plays in around 45 to 60 minutes, and will carry an MSRP of $34.90 when it arrives in May.

Medieval cities were home to very different types of people. Not only pious monks, humble scholars and trustworthy merchants, but also those mischievous, cunning and dishonest. Welcome to the city of Slyville, where you become one of the latter kind! As head of a guild operating in one of the world’s major trade and cultural centers in the Middle Ages, you will be sending your trusted henchmen to various districts to find trade bargains, make deals, and provide your organization with more power and wealth — maybe not always in a way that is completely legal, but the end justifies the means, doesn’t it? After all, you want to get in the graces of the Prince, right?

Slyville is a game of pretense and deceit for 3-5 players in which managing your resources matters just as much as your bluffing skills and the ability to figure out the opponents’ strategy. Try to predict what Goods your adversaries might need, and do your best to upset their plans, but above all, secure the most valuable Deals for yourself!

In Slyville, the players become heads of guilds operating in a medieval city and send their trusted henchmen to do business and close shady deals. Each turn they have seven cards in their hands and must play four of them onto spaces on the district boards placed in the center of the table. By using their card actions, they bid to acquire goods in five types that can later be spent on deal tiles. If a player has collected the goods required by a chosen deal, they must play a deal card and spend the appropriate goods. Tiles are worth 20-40 points, and the player who gathers 100 triggers the endgame. After that, the rest of the players take their final turn and points are counted. The highest scorer wins and becomes the most influential guild master of the city! 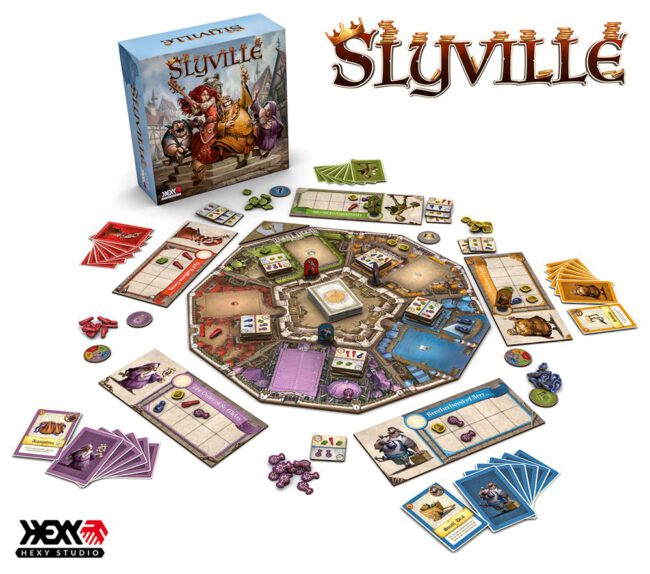