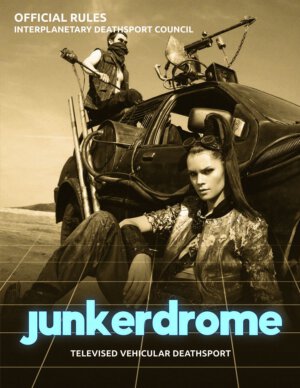 A new set of vehicular combat miniatures rules have arrived in PDF from Goblinoid Games. Take to the arena in a dystopian future to become a ratings champ and media darling by destroying your automotive opponents in Junkerdrome. The PDF is available at DriveThruRPG for $5.95.

You’ve scrounged, stolen, maybe even killed to put together your combat vehicle.

You payed off deathsport officials to get a shot at an audition.

And now you are a contestant in the most famous deathsport on Earth and the colonies.

Junkerdrome is a game of auto combat in a dystopian future. You build a vehicle and fight it out with other drivers in a televised deathsport. Wastelanders and offworlders alike live vicariously through your struggles in the arena.

They want your blood for entertainment.

You just want to make it big.

Junkerdrome is a tabletop miniatures game of auto combat. You use commonly available inexpensive toy cars. The game uses d6s for resolution.