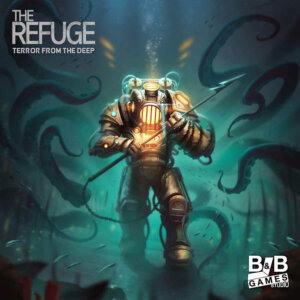 An interesting looking a release has arrived from B&B Games Studio, The Refuge: Terror from the Deep. In the game, players take on the roles of divers attempting to reach an escape pod with their cargo while also evading the monstrous Kraken. The Refuge: Terror from the Deep is for one to six players, ages 14+, plays in around 20 to 60 minutes, and carries an MSRP of $59.99.

The Refuge: Terror from the Deep is a new, standalone version of B&B’s 2016 board game The Refuge: A Race for Survival.

In Terror from the Deep’s Competitive Dive, 2-6 divers compete by racing to the goal and planning movement to outwit their opponents — all while escaping from the Kraken’s wrath! The object of the game is simple: Be the first to an unlocked escape pod, and you’ll escape with the cargo and win!

On your turn, you take a single action:

As you move you activate spaces on the board. For example: the Spawn space adds pesky tentacles that slow your opponents down, and the Lair space controls the Kraken’s tentacles.

Combining your hand of cards with your movement allows you to string together combos — propelling you toward the final goal. Don’t wait too long for the perfect combo – the board will fill up quickly with tentacles, and the Kraken is always hungry!

The Refuge: Terror from the Deep also features new 1-4 player solo and cooperative gameplay in which players work together to defeat the Kraken! In a Cooperative Dive, you and your teammates will have to work together to accomplish a series of challenging objectives as the Kraken threatens to overwhelm you. Can you escape? 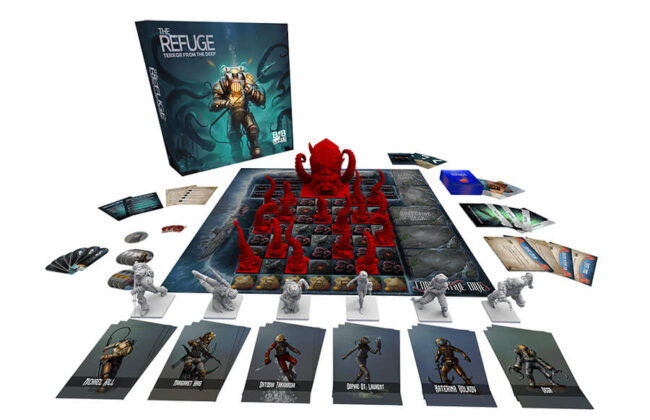 Tags
B&B Games Studio The Refuge Terror from the Deep