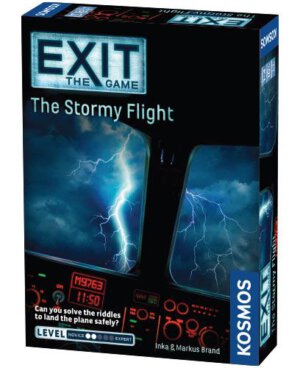 This April will see the release of the latest in the mystery series of EXIT games from KOSMOS. EXIT: The Game – The Stormy Flight places the players in the roles of an aircraft’s crew who suddenly need to repair the plane and safely land. The game is for one to four players, ages 10+, plays in around one to two hours, and will carry an MSRP of $14.95 when it arrives on April 1st. No foolin’!

Team spirit, creativity, mystery and speed are in demand at EXIT: The Game – The Stormy Flight. The 1-4 players have little time to bring a complicated situation under control again: The players are part of the crew of a passenger plane headed to Barbados. Suddenly they get into the middle of an electrical storm. Water penetrates the machine and parts of the technology fail. Will the team be able to repair the aircraft and land safely? There is not much time left…

You are crew members on a passenger plane bound for Barbados. You have flown this route countless times already and have experienced everything possible (and impossible): technical malfunctions, turbulence…even tour groups who are flying to Hamburg, Berlin, London, or Amsterdam in order to visit so-called “escape rooms.” But what’s waiting for you today is going to leave everything else in the dust. The weather service already announced that things might get “a little rough,” but now you find yourselves in the kind of electrical storm that can easily throw even an experienced crew into a state of panic. The clouds are almost black, flashes of lightning rip through the dark sky, and rain pounds the engines. Suddenly, an alarm light comes on, then another…and you have an uneasy feeling that the rest of the flight might become the greatest adventure that you have ever experienced. Can you solve the riddles, repair the airplane, and land safely?

In Exit: The Game – The Stormy Flight, players must use their team spirit, creativity, and powers of deduction to crack codes, solve puzzles, collect objects, and earn their freedom bit by bit. As with all games in the Exit series, this fun-filled, inexpensive game can be played only once. 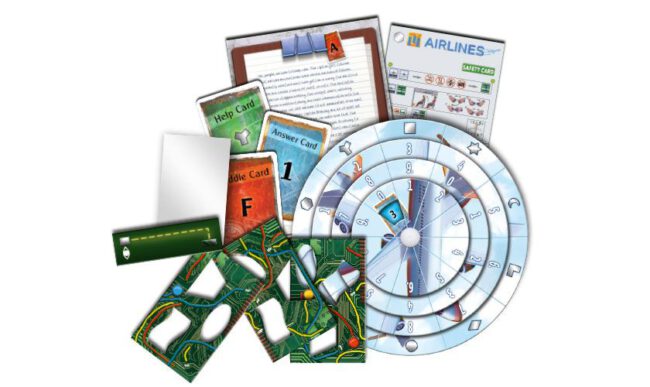