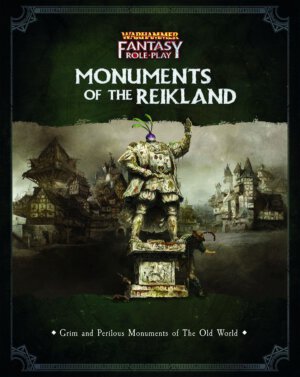 Cubicle 7 Entertainment has released a new, but short, supplement in PDF for Warhammer Fantasy Roleplay. Monuments of the Reikland shares five unique pieces of public art which have interesting backstories as well as a plethora of adventure hooks for any WFRP campaign. The 15 page PDF is now available at DriveThruRPG for $3.99.

Five Grim and Perilous Monuments of The Old World

Monuments of the Reikland offers five unique memorials, statues, and towers, perfect for dropping into an ongoing Warhammer Fantasy Roleplay campaign, or used to kick start a new adventure. Each one is packed with colour and detail, beautifully illustrated, and laced with intrigue.

Wherever you travel in the Empire, monuments peer down on you. They stand to commemorate figures from history, great events, or just the aesthetic tastes of a wealthy noble. Many a bustling market square, street corner, bridge, or gatehouse features a statue or some work of public art. Even in the remotest places, folk of lesser means erect crude standing stones or carved wooden memorials. While most of these are just what they seem, a handful hold secrets at which the casual observer may only guess.

Monuments of the Reikland Includes includes:

The Statue of Burgomeister Holger Rauck: Never well liked, the Burgomeister was certain a fine statue would be just the thing to prop up his flagging reputation. The locals disagreed.

Memorial to the Fallen of the Battle of Auerswald: A memorial to remember an ill fated charge against the goblin hordes of Grom the Paunch, a small addition by the stonemason hints at a deeper purpose.

The Paranoth Column: Overlooking the River Schilder, the column is said to be a monument to a former Supreme Patriarch from the Jade Order, Garvan Paranoth, while others claim it was a monument to his folly.