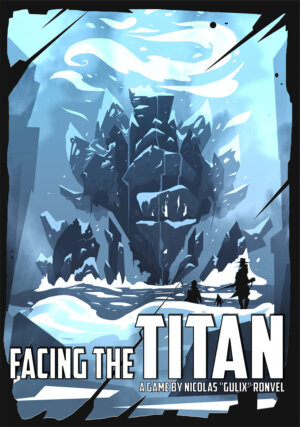 An interesting looking roleplaying game has arrived from author Nicolas ‘Gulix’ Ronvel. In Facing the Titans, players will form a company tasked with doing battle with massive monsters in a GM-less, zero prep game. You can grab the 369 page hardcover, with PDF, for $25.00 or in PDF alone for $14.00 from DriveThruRPG.

“We are the Company. Hunters, warriors, mages, scholars, nobles, barbarians, we have been brought together for one purpose: to put an end to the reign of the Titan. This gigantic being has caused ruins and desolation to our world for generations and generations. Progress and wonders are constantly at the mercy of the Titan’s whims. Despite their differences, an agreement exists between the nations. The Order of the Titan. Us and others. We have each followed a mystical instruction, a physical training, a spiritual journey or even all this. The decisive day is approaching. The one where our Company will be gathered. The one where we will stand up to the Titan. We have prepared for this confrontation, but we must not neglect our instincts in this battle. Let us get to know each other and rediscover each other after all these years. Tonight, let us share our experiences so that tomorrow those who survive can tell the stories of those who fall.”

Facing the Titan is a GM-less, zero-prep roleplaying game, for one-shots games of about 3 hours. It has been designed and playtested for groups of 3 to 5 people. A solo mode is also available.

You will play the Compagny, a group of heroes whose fate is to face the colossal Titan. And to destroy it!

You will only need something to write with and on, and two dices: a white one and a black one. Based on Swords Without Master (by Epidiah Ravachol), the game system will get you to tell the journey of your Companion to the final clash against the Titan in a series of five distinct Phases:

You’ll find six basic Titans in the book. They’re all delivered with their own Setting, a tiny universe suited to them. 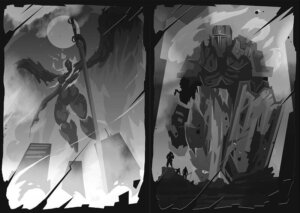 Each one of these Titans will offer you an original adventure, replayable at will thanks to some random lists generating a new Setting at each game.

In addition to these six Titans, the crowdfunding campaign of Facing the Titan has made it possible to add articles about the game, to extend the way to play it, to modify it or event to create content like new Titans.

Additional Titans have been added:

All the Titans of the game have been illustrated by Roger Heal.