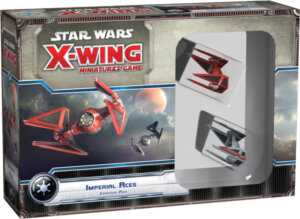 Fantasy Flight Games has the latest expansion for the X-Wing Miniatures Game on the horizon and this one will feature more TIE Fighters. The expansion will include two miniatures as well as pilot cards and rules to add new twists and turns to your Star Wars dogfighting.

The X-Wing: Imperial Aces Expansion Pack will carry an MSRP of $29.95.

In September, we announced the upcoming release of the Imperial Aces expansion for X-Wing. Its two TIE interceptors feature variant paint schemes that represent the fighters of the 181st Imperial Fighter Wing and the Emperor’s Royal Guard.

One TIE interceptor is painted with the Saber Squadron’s distinctive red bloodstripe.

The other TIE interceptor is painted red to distinguish it as part of the Royal Guard.

But, apart from two new, eye-catching TIE interceptors, what does the expansion add to your space battles?

The short answer is that Imperial Aces provides players a host of new tactical and strategic considerations with eight pilot cards and twelve upgrades. For a longer answer, including an exploration of the rationale behind the expansion’s design, we turn you over to lead developer James Kniffen and a closer look at the four unique aces of Imperial Aces.

When we began development on Imperial Aces, we took a close look at the qualities that distinguish the TIE interceptor in the Star Wars universe and the game. Its agility and maneuverability were obvious stand-outs, so we highlighted these aspects in the design of our 181st Imperial Fighter Wing pilots. The TIE interceptor also rewards a high-risk play style, so we decided to design the unique pilots of the Royal Guard around risky abilities that elite players could utilize. As a result, each TIE interceptor in the expansion has an identity to match its paint scheme.

The legendary members of the 181st Imperial Fighter Wing, also known as the Saber Squadron, are masterful pilots, always able to position themselves perfectly for the kill. Soontir Fel and Turr Phennir epitomize this concept with offensive and defensive maneuvering that can unravel an opponent’s strategy in the blink of an eye. We wanted to elaborate on this theme with Imperial Aces Lieutenant Lorrir and Tetran Cowall. Lieutenant Lorrir triples the options of a barrel roll by using either bank template instead of a straight template. As a result, he’s able to change facing on a whim, combining the best aspects of the barrel roll and boost actions. Establishing a Range 1 shot on this slippery pilot is a unique challenge that often results in him shooting you instead.

While the Saber Squadron operates as a finely-honed team, the Royal Guard has no need for such camaraderie. They are ruthless killers, trained to neutralize any threat, and we designed their abilities to reflect this single-minded goal. Kir Kanos focuses on pure, unbridled offensive power. His ability is better than adding an attack die; it’s incredibly potent and he can use it selectively after seeing his dice results. Since he needs to spend evade tokens to fuel his ability, he isn’t as free to use barrel roll and boost actions to optimize his positioning, so his handler needs to really focus on predicting his opponent’s moves.

Meanwhile, Carnor Jax is the ultimate predator. He utterly denies focus and evade actions, leaving his opponents defenseless. Even better, he prevents focus and evade tokens from being spent, so he can shut down the focus and evade actions of ships with lower pilot skill by pursuing them at close range; those ships, then, effectively lose their actions! Even more than Kir Kanos, though, Carnor Jax demands that his handler have the precognition of a Sith lord to avoid being destroyed while maximizing his ability.

Players of all skill levels will enjoy what the Imperial Aces expansion adds to X-Wing. The Saber Squadron’s pilots continue to reward clever flying, allowing players to use motion to their advantage, and the Royal Guard pilots perfectly evoke the expansion’s title; these are ace pilots designed to employ new, high-risk tactics.