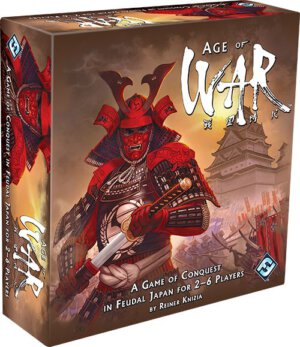 Fantasy Flight Games has a new Reiner Knizia design arriving in Q2, Age of War. The card and dice based game is set in fuedal Japan and will allow two to six players to portray rival daimyos battling to unite the country under one leader. Age of War is scheduled for a Q2 release and will carry an MSRP of $12.95.

Can you unite the clans amidst the tumult of war? Age of War is a fast-paced dice game for two to six players by world renowned game designer Reiner Knizia. You and your fellow players assume the roles of daimyos competing to unite the warring clans of feudal Japan and assume control of the nation.

During play, you muster troops by rolling seven custom dice, and you use. these troops to lay siege to one of fourteen different castles, each of which requires you to assemble a unique combination of troops in order to conquer it. Castles grant points towards your victory, and you can gain more points by uniting an entire clan. The daimyo with the most support at the game’s end is the victor!

New Edition of Reiner Knizia’s Tutankhamun is on the Horizon