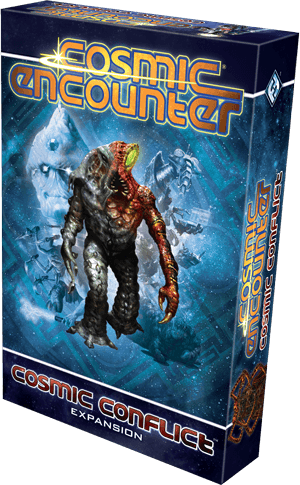 Cosmic Conflict will soon be making its way to store shelves to bring new dimensions to the mega-popular Cosmic Encounters and FFG has a sneak peak at some of the cards.

The infinite stars hold infinite hazards, threatening to thwart your quest of ultimate conquest. Not only do opposing aliens stand in your way, but now the harsh elements of deep space will make your mission much more unpredictable.

Recently we announced the upcoming release of Cosmic Conflict, the latest expansion for Cosmic Encounter, the legendary game of strange aliens and hostile space colonization. Today we’ll take a deeper look into the game by exploring the new Hazard cards and reuniting with a familiar and filthy face.

Hazard cards come into play during the Destiny phase of an encounter. If a player draws a Destiny card with a hazard symbol on it, then that player draws a card from the Hazard deck. These Hazard cards introduce a variety of effects – some only lasting for the duration of the encounter, while others remain in play.

Many Destiny cards from the Cosmic Encounter base game already contain this Hazard symbol, making the Hazard variant completely compatible with all other published variants.

In addition to the Hazard variant, Cosmic Conflict also adds 20 new aliens to face-off against. One of these new aliens is a classic whose stench will need no introduction.

Filth is able to repel enemy ships from his planet with his noxious odor. In addition, rather than giving control of your planet to your attacker after a failed defense, Filth drives everyone from the planet, leaving it completely fumigated.