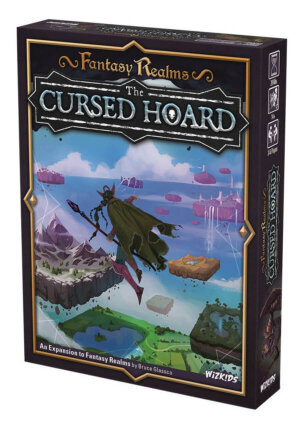 Early next year will see the release of an updated edition of a classic fantasy card game from WizKids. Fantasy Realms: The Cursed Hoard is a set collecting game and includes two new expansions to the core game. The game is for three to six players, ages 14+, plays in 20 to 30 minutes, and will carry an MSRP of $14.99 when it arrives in January.

Fantasy Realms is an acclaimed card game from designer Bruce Glassco that takes seconds to learn: Draw a card from the deck or discard area, discard a card, and try to build the strongest hand by using the best card combos.

Fantasy Realms: The Cursed Hoard expands on the original, adding two new modular expansions that can be added together or separately.

Cursed Items adds a new deck of cards. Players each take one item that they can use whenever they wish to create a powerful effect, like taking double turns, hiding discarded cards, or even skipping your discard phase to keep an extra card! But whenever you use a Cursed Item, it turns into negative points at the end of the game—the more powerful the effect, the more points you lose!

Add three new suits to the game: Develop your realms with Buildings, attract powerful mythical Outsiders, and raise the Undead.