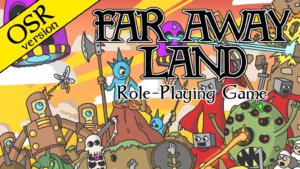 The oddly lovable, yet completely gonzo, roleplaying world of Far Away Land is getting the old school revival treatment through Kickstarter. The project, from Simian Circle Games, for the Far Away Land: OSR Version is over 400% funded and you can reserve a copy of the core book in PDF for a $10.00 pledge, the PDF and softcover book for a $15.00 pledge, and the hardcover and PDF for a $22.00 pledge through May 29th. Since just about everything regarding the book is completed, the expected delivery is actually this August.

The Far Away Land (FAL) OSR is a re-imagining of the Far Away Land RPG – through the lens of OSR-style games and mechanics. This project was inspired by Swords and Wizardry Light, a stripped-down, rules-lite version of Swords and Wizardry that uses only d20s and d6s. FAL was originally inspired by simple, old school gaming mechanics that place emphasis on characters, story, and adventures rather than heavy rules. This version of FAL uses familiar mechanics (6 stats, HP, AC, etc.) mashed into the Far Away Land setting. It maintains the tradition of a rules-lite game while using a more well-known system that is compatible with the world’s most famous rpg and many of its clones. Essentially, FAL OSR

is a complete circle, back to what initially inspired the original game, set in the gonzo world of Far Away Land.

The physical book is 130 pages, 8.5 x 11, full color. It features rules for character creation, new classes, new playable races, 100 monsters, new spells, tons of rules for various mini games and lots more (detailed chapter by chapter below). The book is written, tested, and finished. It has a ton of artwork in the style of Far Away Land and maintains the quirky nature of that setting while giving players familiar (although modified rules). The pdf is bookmarked with a complete index and table of contents.

These rules were designed to be lite and simple while being modular enough that they can be added or subtracted from the core at will. XP has been removed. Leveling has been simplified. Alignment is no more. Character creation is fast and fun and has little mini games to make the process of creating a character its own game. Combat is deadly and designed to be fast while giving players loads of options as to how they can stave off death. Magic is modified to be a bit more open and allow for a broader range of class types. Far Away Land is designed to be quirky and deadly and fun and dangerous while also being highly modular in form.