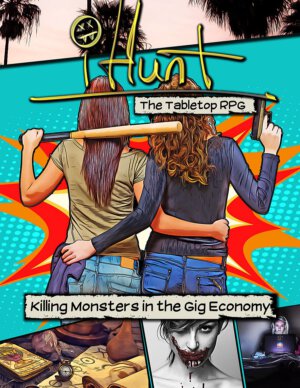 Those of you looking for a different take on the urban horror genre of roleplaying games might want to check out a new release from Machine Age Productions. Powered by Fate and based on the Olivia Hill novels, #iHunt takes on the mildly lucrative world of monster slaying and the titular app player characters use to score gigs; this t’ain’t Buffy The Vampire slayer, gang. While a print edition is in the works, you can score a copy of the 328 page corebook in PDF at DriveThruRPG for $30.00.

Be a hero. You pick the hours.

#iHunt is a story telling game about killing monsters in the gig economy. In it, you play millennials scraping by paycheck to paycheck to make ends meet. A gig app called #iHunt offers them more money than they’ve ever made to hit the streets and kill vampires, werewolves, demons, and anything else that goes bump in the night.