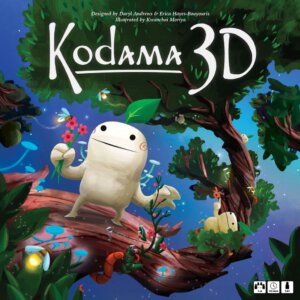 Fans of the family friendly gameplay of Kodama: The Tree Spirits will be pleased to know a new title in the line arrives next month from Indie Boards & Cards. Kodama 3D tasks the players with growing and maintaining their own three dimensional trees in order to beautify the forest. The game is for two to four players, ages 14+, plays in 30-40 minutes, and will carry an MSRP of $29.99 when it arrives February 5th.

Kodama 3D features all the fun and beauty of Kodama: The Tree Spirits brought to the third dimension!

When they grow older, every Kodama is given a tree of their own, and it’s their job to watch over it and help it grow healthy and strong. From trunk to twig, they must keep it green and growing, the perfect home for flowers, mushrooms, and critters of all kinds. Even other kodama love to travel around and visit new trees. Now it’s your turn! Create your own masterpiece of branches and leaves, and make the forest even more beautiful!

In Kodama 3D, players will grow trees in three-dimensional space. Players move Kodama pieces around a grid of branch tiles to pick the branches they want to add to their tree. When players have placed 12 tree branches, score all goal cards. The player with the most victory points wins.