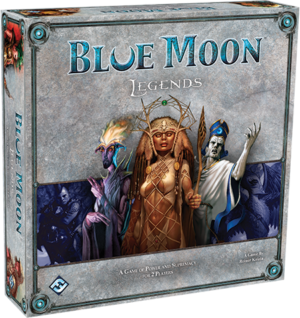 I’d say it’s pretty apparent I’m not the biggest fan of Reiner Knizia designs (I’m stifling a yawn as I type this) but Fantasy Flight Games has revealed an updated edition of Knizia’s Blue Moon. This time around it will be called Blue Moon Legends, which is a collected edition of the two player card game. The title should be on store shelves sometime in Q4 of 2014.

Blue Moon City has been plunged into chaos. With the death of its ruler and the disappearance of its creator, the city needs a strong leader now more than ever before. The separate peoples of Blue Moon City are gathering, each to support one of the heirs and claimants of the throne. Perhaps a strong ruler can restore peace to the city and convince the creator to return.

Fantasy Flight Games is pleased to announce the upcoming release of Blue Moon Legends, a collected edition of Reiner Knizia’s classic two-player card game Blue Moon! The battle for the throne is more intense than ever before as you struggle to garner the favor of the elemental dragons and establish your claim to the throne. You must lead a people successfully, and Blue Moon Legends offers more opportunities to do so by including every people deck expansion ever released! Now, you lead any of nine different peoples as you attempt to rise victorious and repair the damage to Blue Moon City.

Blue Moon Legends pits two players against each other in tense, head-to-head card play. Players can either play the game straight out of the box with decks or strategically customize the perfect deck to take down their opponent. With hundreds of cards to choose from, no two games will be the same. Blue Moon Legends contains all cards from award-winning designer Reiner Knizia’s Blue Moon card game in a single box.

New Edition of Reiner Knizia’s Tutankhamun is on the Horizon